Skip to content
“In this world, nothing can be said to be certain except death and taxes.”  We all know this famous quote by Benjamin Franklin.  I might add one more item to his short list of certainties:  hurt.  Please don’t think I’m being negative.  It’s just that the longer I live the more I see it…..the various hurts that impact lives and families.  It seems that no one is immune from sometime, somehow, having to face hurt.  And how we respond to those hurts is paramount to our happiness and even our health.
Sadly, even Christians suffer hurts that are sometimes at the hands of others.  Like I said, none of us is immune from hurt.  As believers, we have a standard for dealing with hurt that goes far beyond any self-help book ever written.  Of course, I mean scripture.  But still, dealing with the pain of various hurts is very difficult…..and sometimes lasts for the rest of our lives.
When forgiveness is sought by the offending party, and reconciliation is offered, then the healing can more easily begin.  This certainly is the desired outcome for anyone who has or is suffering from the hurts inflicted by others.  But what is one to do when forgiveness is not offered, and when the desire for reconciliation is rebuffed?
Which brings me to my bean patch from last summer.  Stay with me here.  Those who know me know that I learn many lessons from my simple life of household and outside chores.  So last summer, in June, Gary and I were gone for a week.  We returned from our trip to find that our garden had grown tremendously.  I saw right away that I had tons of green beans to pick.  Well, not tons but it felt that way as I bent down to examine the vines.  I had so much catching-up work to do after our trip that I was unable to make it out to the bean patch for a few days. 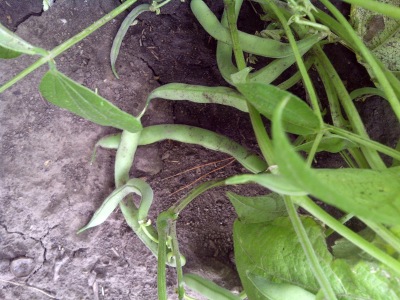