Skip to content
Aaron likes music of various sorts and is tolerant of most of my musical choices.  We all have our favorites when it comes to the music that we enjoy and Aaron is no different.  The one form of music that he probably enjoys the least is opera.  I don’t listen to opera, honestly, though I do appreciate it.  To Aaron, though, even Handel’s Messiah is opera.  I love The Messiah, especially at Christmas…….and inevitably when I have it playing, Aaron will walk in, raise his eyebrows, give me “that” face, and say something about Mom liking opera.
When The Phantom of the Opera movie hit theaters several years ago, it quickly became a favorite to me and Andrea.  I have the CD, and so a couple weeks ago I decided to play it in the van while driving Aaron to his group.  He had heard it before, a long time ago, but this time he was very fascinated with it.  So fascinated, in fact, that he decided to start looking The Phantom of the Opera up on the internet…..meaning he was looking at YouTube trailers and talking about this movie….a lot!  It didn’t matter to him that it had the word “opera” in it…..or that some of the singing was rather operatic.  He was becoming hooked on the story and had tons of questions.
I was in Target one day when I saw The Phantom of the Opera DVD on sale for only $5.00.  I bought one and later that day showed it to Aaron, to his great delight.  Now he could actually watch the real movie instead of just watching the movie clips.  And hopefully have all of his questions answered instead of clomping down the stairs to find me, with yet another query about The Phantom of the Opera. 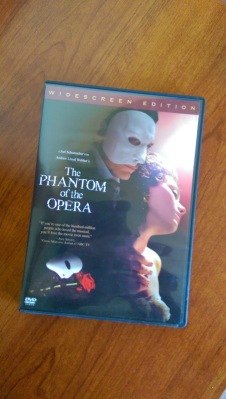