I returned on Sunday afternoon from my trip to Houston.  The long weekend with Andrea was wonderful.  It was time to come home, though…….time for another re-entry into life with Aaron.  I saw Gary as I walked down the slight incline from the security area in the airport.  We hugged…and then Aaron stepped up.  I hadn’t seen him at all, so I was surprised and he was very happy about that.  He gave his low chuckle and smiled broadly, but I knew he wouldn’t want a big hug so I just said, “Hi Aaron!  I didn’t see you!”
“Mom!” he replied.  “I’m hungry.  Can we eat at a restaurant?”
And there was my welcome home.  Gary and I laughed, both of us knowing that Aaron wasn’t going to ask about my trip or my flight or Andrea or even her two dogs that he likes.  Nope.  Not Aaron.
I told him that I was hungry, too, but I didn’t think we needed to eat at a restaurant.  “So what is there to eat at home?” he asked.  And I reminded him that I hadn’t been at home for a few days but that I was sure there was something there to eat.
“We need to do my sheets,” he then said.  Our routine is to change his sheets every weekend, and Aaron wanted me to know that time was running out on our weekend chore.  I assured him that I would make every effort to help him with his sheets before the day was over…….before the weekend chore was left undone when the official weekend was over.  We can’t have that scenario!
As we stood at baggage claim, Aaron talked about his latest movie that he’s watching, as well as one he finished.  He talked about Wheel of Fortune and what he and Dad had done while I was gone and all sorts of his usual random topics as we got in the van and drove home.  Still no interest in where I had been or what I had done.  I would have been shocked senseless if he had asked me a personal question.  Aaron was just glad that Mom was home so that we could change his sheets and he could talk to me and maybe, just maybe, still talk me into that restaurant idea.
Sure enough, we were later changing his sheets and he was still talking.  “Mom, there’s a girl at Paradigm that speaks Spanish.  She has to have a girl with her to tell what she’s saying!  Do you call that a pronouncer?”  I almost hated to tell him the correct term, as I so often hesitate to change his way of speaking…….because he is refreshing and unusual and I love that.
Aaron has recently taken a liking to Jolly Ranchers, so before I left I bought a huge bag of Jolly Ranchers from Sam’s.  I feel like they take longer to eat and so he’ll consume less candy that way, yet still satisfy his candy urge.  As we were changing his sheets, I looked down and saw quite a few Jolly Rancher candy wrappers in his trash can.  Then I saw one of his bowls, full of Jolly Ranchers, and another bowl containing only some grape Jolly Ranchers.  There goes Aaron.  He puts EVERYTHING in a bowl or in multiple bowls, but I didn’t think he would put those hard candies in a bowl.  Silly of me.  The grape ones are his favorite so he was keeping those separate.  He always develops his own system for organizing his items, and so Jolly Ranchers were no exception to Aaron’s rules. 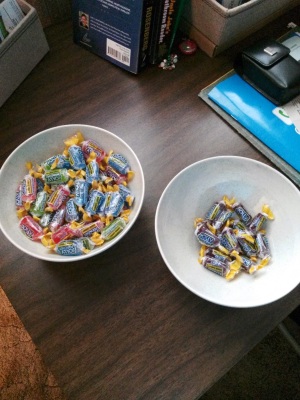 I was concerned, though, with all the wrappers in his trash can.  I was hoping he wasn’t chewing them and hurting his teeth, so I just asked him if he was chewing them.  He told me he was.  Hmmm.  I wondered if he was waiting for the candy to get small in his mouth before chewing or what.  “Aaron?” I asked.  “When do you chew them?”
“When they’re done being sucked on!” he answered.
Well, of course.  Silly me again.
We’re back in the swing of things now.  He’s been in a mostly good mood since I’ve been home.  He walked in the kitchen the other evening, wanting me to watch a movie clip on my notebook.  I was cooking supper and told him it would have to wait.
He came back a little later with the same idea.  “Mom!  Can you watch this trailer now?  It’s 1:47.”  And you know that he’s telling me the time of this particular clip.  I told him it would still have to wait.
Soon he was back in the kitchen.  “Mom!  It’s not 1:47.  It’s 1:46.  Is that better?”
Oh, Aaron, you make me laugh sometimes.  You actually make me laugh a lot.  And I was proud of him for waiting until we were watching Wheel of Fortune for me to finally find and watch with him the movie trailer……….the 1:46 movie trailer.  Not 1:47.
I was in the garden this morning, hunched over picking green beans…….wondering what possessed me to want to plant green beans again.  I looked up as Aaron walked outside.
“Mom!  I got up at 9:02!”
“9:02,” I repeated, realizing how odd that would sound to others but how normal it is for our home.  “That’s good, Aaron!”
He agreed, and then I asked him if he had drunk his coffee yet.  He had not, so I told him that I was nearly done and would pour it when I came in.
“No,” he said, as he headed back in the house.  “You do your thing and I’ll do my thing.”
And Aaron will most definitely do just that.  He will do his thing no matter what’s going on around him.  In fact, much of our thing is actually dictated by Aaron doing his thing………doing his thing in his way, always.  Like the Jolly Ranchers in the bowl………changing the sheets on the weekend no matter what…….the 1:47 and the 1:46………..getting up at 9:02.
As much as we can, we allow Aaron to do things his way.  Life is better that way, usually, and a ton more interesting than most of the boring ways we do things.
Have at it, Aaron, as Gary’s Mom would have said.  Do your thing!