Skip to content
On Wednesday night Aaron wanted to play a game, like he does every night of his life……and since I was too sleepy to feel like I could stay awake to read a book, I agreed to a game of Tri-Ominos with Aaron.  Does that sound self-serving?  I also agreed to a game because I do love Aaron, but sometimes I don’t like spending time with Aaron.  That may have sounded worse.  Well, anyway, some nights I just don’t have it in me, or I really don’t have the time, to sit at the table and play a game with Aaron.  Because it’s not just playing a game……….it’s listening to his non-stop talking on most nights about a movie or a favorite game………and listening to him thump on the table with his hand………..and listening to him whistle…….and listening to him clap…….and listening to him slurp out of his water bottle……..
But Aaron can also be very funny and insightful and interesting.  I’ve beaten him several times recently in Tri-Ominos, so he was absolutely thrilled when our first game went by quickly and he BEAT Mom 171-25!!!!   Of course, he wanted to play again and since we had time and I had no easy way out, I agreed.  This second game went by much slower, naturally.  His talk of clone armies and squads and drones and I don’t even remember what else was definitely having an effect on me.  I could NOT stop yawning and rubbing my eyes.  I was in a haze when I saw that Aaron had reached over and picked up my cardboard coupon from Bath and Body Works.  It was actually two coupons, with the serrated line between them.
I have to explain that Aaron, who clips all of my grocery coupons, can sniff out a coupon from another room.  I had a little stack of restaurant and other store coupons laying there on the table.  I keep them in a box in the van so I have them when I need them, and I had set these aside to take to the box later.  I’ve told Aaron and told Aaron that I don’t want many of those coupons to be clipped.  I prefer to store a sheet of those coupons in my box, for instance, instead of having 15 little cut coupons getting lost in the box.  Aaron’s radar went right to the Bath and Body coupons with the serrated line that was just screaming at him.  TEAR ME APART!………..is what it was saying to Aaron.  I looked over at Aaron through another yawn and saw that he held that little coupon strip in his hand, staring down at it with his motive clear.  YES, I WILL TEAR YOU APART!……..is what Aaron was saying to the coupons. 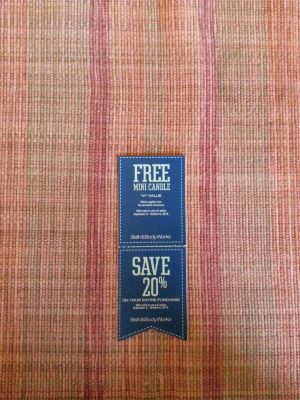 Now I realize this is no big deal, but you must understand that if you give Aaron an inch, he will take a mile……….clipping everything with lines on it along the way.  On Sundays, I have taken out some of the coupons from the newspaper insert that I don’t need in order to lessen his coupon cutting load.  But if he finds them, he gets irritated and insists on taking them so he can cut them out.  He doesn’t care that I won’t use them.  They have lines and they MUST be cut!!!  Can you spell r-i-g-i-d     r-o-u-t-i-n-e-s?
So when I saw him with my Bath and Body coupon strip, my haze suddenly cleared and I told Aaron to put my coupons down, even as he was already starting to bend them at that screaming serrated line.  It took him a few agonizing seconds to put them back over in the little coupon stack where they belonged.  He so very much felt the need to tear those coupons apart.  I explained, as usual, that I didn’t want those coupons torn apart.  “But Mom,” he countered, “they have that line where they’re supposed to come apart.”
No, Aaron, they don’t HAVE to come apart.  But my words did nothing to settle that conflict in his head about the purpose of that serrated line.  He thought that Mom was certainly ridiculous to not have torn the coupons apart already, and he was here to set this matter straight.  Several more times during our final game of Tri-Ominos I saw him with the coupons in his hands, and each time I told him no……..do not tear the coupons apart.  Finally, he reached across the table and handed me the little coupon strip.  He knew that the pull to tear those coupons apart was too strong to resist, so he handed me the coupons in an effort to rid himself of this strong temptation.
“You just can’t resist tearing the coupons apart, can you, Aaron?” I asked.   And he agreed that he could not resist………so there, Mom!  Take them!  I kept the tempting coupons with me for the rest of the game, out of Aaron’s reach, and when we were through with our game I put them back in the stack of coupons waiting to be taken to the van.
The next morning,  Aaron got up and soon joined me at the kitchen table.  We talked for a few minutes about how he slept and about his upcoming day.  I was reading the paper as we talked, absorbed in juggling Aaron’s conversation with what I was reading………….when I heard it.  It was the soft but unmistakable sound of something being torn apart at a serrated line.  Zzzzzzzip.   My head jerked up and there sat Aaron, smiling broadly as he held those little Bath and Body coupons…….one in each hand.  He had torn them apart, of course.  His smile was not one of meanness, but instead was one of relief, almost.  His purpose in life………..for that moment………had been fulfilled.  The coupons were no longer tormenting him to tear them apart.  The deed was done!  The mission accomplished!

Of course, I fussed at him and tried to correct him…….all the while knowing that he absolutely could not restrain himself from carrying out the purpose of that serrated line.  This is part of the complexity of Aaron.  I would say charm, but sometimes it’s anything BUT charming………..although these acts are often amusing as I look at Aaron’s gleaming eyes and big smile.
That afternoon he called me from his day group.  He had actually called several times during the day, but I wasn’t able to answer then.  When I did pick up the phone, the very first words out of his mouth, spoken with great feeling, were, “I couldn’t reach you!”
No hello or anything………..just, “I couldn’t reach you!”
Bingo, I thought!  Aaron, most of the time I can’t reach you either!  And I have some torn apart coupons to prove it!