Skip to content
Aaron was up very early this morning, before 7:00.  I listened from the kitchen, wondering what was up.  He didn’t come downstairs, though, and soon I heard him turn on a DVD.  I decided not to bother him and just see how the morning would play out.
I was heading outside to do a little more raking of small limbs and twigs that were left over after a huge storm last week.  Aaron came downstairs before I went outside, and proceeded to tell me that he was tired and that his stomach hurt, and that he didn’t want to go to Paradigm…….and furthermore, he had NO intention of going to Paradigm.  I just let him talk and I told him I was sorry he wasn’t feeling well………and then told him I was going out to do some raking.  I know not to push him too much when he’s in these moods.
I hadn’t been outside very long when I looked up to see Aaron walking toward me, his long pajamas swiping the grass, and his sweater and long shirt making him look not only hot on this summer day, but looking like an old man as well.  He watched me rake and he told me that he still wasn’t feeling well, and I told him that I was still sorry about that.  He turned and walked away, returning soon carrying his mulch trash can.  He sat near the trees and bushes, where the twigs and the bark are plentiful, and then he was quiet as he broke the wooden pieces into even smaller pieces.  I knew he was relaxing, in his Aaron way, and so I didn’t make him come in even after I was finished and as I headed for the house. 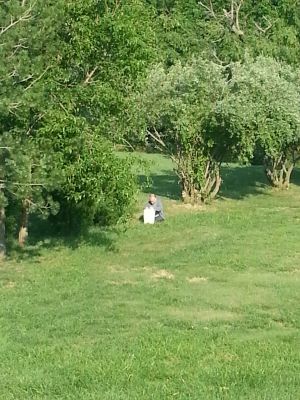 After my shower, I looked out of an upstairs bedroom window and there he was……..still immersed in his thoughts and his stories as he snapped the little twigs into tiny pieces.  I poured his coffee, and then leaned out the back door to tell him that I would fix him some sausage if he wanted it.  I didn’t know what reaction I would receive……..but Aaron was compliant and happy to hear the words coffee and sausage.  He took a few more minutes for his thoughts and his stories to finish in his head, and then he stood up and carrying his trash can, he slowly came back to the house.
Now Aaron was happy as he ate his breakfast and drank his coffee, then showered with no fuss and was ready to go when it was time.  Jackson hopped into the van with us, which made Aaron extra happy, and as we drove off he put in a new favorite CD and then began his talking……….but not before I told him that I was very proud of him for pulling it together and doing so well.  He was puzzled about what that term “pulling it together” meant, and so I explained it as we drove to meet his group.
Later today, as I pulled into the Sam’s parking lot, my phone rang and I saw that it was Aaron calling from Barb’s phone at Paradigm.  I answered, and right away told Aaron that I was getting ready to go into Sam’s and couldn’t talk long…….because Aaron will talk very long if I let him.  When he heard that I was at Sam’s, he excitedly said, “Mom!!  We went to Sam’s today!”
I expressed my surprise, and he continued, “Guess what I got there?”
I didn’t even try to guess because he rushed right on.  “I got a four berry milkshake!!  It had FOUR different things that have berry in it!!!”
He was very, very excited about the four berry milkshake…..and then he had me help him figure out what things have “berry” in them.  He was happy to hear of all the different “berry” possibilities and I was happy to hear how happy Aaron was today.  Later, at home, he remembered something else that has “berry” in it.  Strawberry Jello!  In fact, last Thursday Gary and I were getting ready to leave on a short vacation trip to Texas.  Aaron walked into our bedroom holding my container of pudding and jello mixes from the kitchen, setting them on our dresser and discussing with me the difference between jello and pudding……..and figuring out that one is wiggly and the other is flat!

So on this evening, Aaron pulled out the pudding and jello container again, holding up the strawberry jello and asking if we could make it tonight.  I was tired……..it was getting late……..and I didn’t really want to make jello, so I begged off and said we would make jello tomorrow.
As Aaron stood in the kitchen with me, talking about jello,  I decided to tell him that in the morning he and I would be going to the air base early.  I told him that he was going to have some blood drawn for a test.  Aaron is so used to having his blood drawn that he hardly even reacted………but then I broached the other subject…….the other test.
“Aaron,” I said, “you also need to have a urine test.  That means you’ll need to pee in a cup, like you’ve done before.”  And Aaron stopped dead still in the middle of the kitchen, stared at me eyeball to eyeball, arched his eyebrows and straightened his back, and firmly said, “I will NOT!!”
Oh boy.  So I assured him that he has done it before, and that he’ll be in a bathroom, and no one will be watching………and anything else I could think of to help him want to pee in a cup.  Then he said, “Well, you’ve never had to do that!”  And I assured him that indeed I have, many times……….and I thought about telling him how much easier this peeing in a cup is for him than for me, but I thought better of it.
I decided that this would be a good time to make that jello, and Aaron readily agreed as he put the peeing in a cup conversation on the back burner and I put a pan of water on the front burner for our jello.  He wanted to help make the jello as I told him that the water had to boil first.
“Will you tell me when the boiling water part is over?” he asked.  I agreed, and later he stirred the jello and we poured it into the pan.  I told him that maybe we could have some tomorrow morning after we…..gulp…….get back from the lab – and peeing in a cup, but I didn’t remind him of that again.  Tomorrow morning just might be interesting.  Very interesting.
I haven’t told him about the fecal test yet.  That’s going to be beyond interesting.  I think I need to go sit in the mulch awhile.