Skip to content
I recently re-posted a much earlier blog I wrote about how Aaron cuts out coupons for me that are in the Sunday morning newspaper.  Coupon cutting has been his Sunday job for many years and he has refined it into an exact science all his own.  Aaron’s autism is in full display as he tries very hard to cut exactly on the dotted lines, and then has multiple containers for the various large and small pieces of paper.  He still takes the thin strips of paper that are left after cutting on the dotted lines, and he cuts those strips into small pieces as he holds the paper over his “small paper” container.   He enjoys watching the tiny pieces of cut paper fall into the container.  What would take me maybe 15 minutes to cut will take Aaron much, much longer because of these tireless coupon-cutting rituals that he performs.
The actual coupons that he saves for me are placed carefully into a little plastic box that has a lid…….placed very carefully and in just a certain way.  He prefers that only current coupons go into this box……….coupons that he cuts out on that particular Sunday.  He has occasionally mixed new coupons into the old if I haven’t had time to empty and file away the current coupons that are in the box. 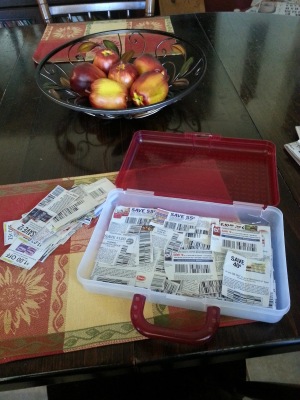 Such was not the case this past Sunday.  I walked into the kitchen and there on the table I saw a messy stack of coupons.  When Aaron walked into the kitchen later, he pointed to the coupon pile and said, “Mom, those are the old coupons that were in the box.”  Knowing what he had done and why he had done it – but wanting him to tell me himself –  I asked him why the coupons were on the table.

He patiently explained to his silly mother that he had dumped the coupons out of the box………but still he didn’t admit why he had done such a thing.  I finally asked him why the dumped coupons couldn’t go into the box and he told his still silly mother, “Because they are the OLD coupons!”
Still playing dumb, I asked, “So can I just put the old coupons in the coupon box now?”  That crazy question caused him to firmly shake his head no and then say, “No!”………just in case, since I was silly, I might not understand the firm shaking of his head.
Just to be certain, I asked, “So the old coupons can’t be mixed in with the new coupons?”  And again came the firm shake of his head and his even firmer, “No!”  I know that it’s best to play by Aaron’s rules in these matters that have no serious consequence, so I left the coupons out for a couple days, in plain sight.  Later, I put them away in the box in which I file my coupons so that Aaron wouldn’t by some chance find that I had disobeyed his coupon orders by mixing the old and the new together.
If there are some good coupons in the Sunday paper, I will sometimes buy a second paper.  Aaron used to cut out all the sets of coupons that I had gathered, but over the past few months he has gotten tired of all that cutting.  One full set seems to be enough for him.  One Sunday, I came home with a second paper.  Aaron saw the extra coupons, and so proceeded to get out his scissors and all his special coupon-cutting containers.  However, it wasn’t long before he was tired.  He didn’t finish all those coupons.  I told him that it was fine, that I would just cut them out later.  This did not sit well with Aaron.  He is the chief coupon cutter……….not Mom!  He began to get angry, so I just let the matter drop.  Later, as I walked through the family room, I saw that the unfinished stack of coupons was gone.
Now I know Aaron very well and I somehow knew what he had done.  Sneaking up to his empty room, I carefully opened his desk drawer and sure enough there they were………..the missing coupons were tucked away in his drawer.  He was not going to cut them out, but he was NOT going to let his silly mother cut them either.  Mom doesn’t even cut on the lines half the time!!  I very quietly eased the coupons out and softly shut the drawer.  I cautiously walked downstairs.  Good!  No sight of Aaron!  I went to Gary’s study and was in the process of sharing the coupon escapade with him when I heard the unmistakable thump, thump, thump of Aaron hurrying down the stairs!
I hid the coupons behind me as Aaron entered the study and I acted like nothing at all was amiss.  But as I tried to slyly walk around Aaron and escape, he spied the papers in my hand.  “What is that?!” he suspiciously asked.  I felt like a teenager who got caught trying to smuggle something forbidden past her parents.  “Oh,” I casually answered, “it’s just the coupons.”  And in a flash, Aaron lunged out and grabbed them from me.  Wow! He was very angry!  As I tried to reason with him, he escalated quickly.  Gary and I were both taken by surprise.
“I’ll cut them out!!” he yelled.  And as we tried to reason with him, he became more and more upset…………until finally he wadded most of the coupons up into a wrinkled mess.  Gary and I hadn’t seen that coming!  But Aaron’s reasoning was clear now……….if he couldn’t cut out the coupons, NO ONE could cut out the coupons.  He finally relinquished the crumpled coupons and we were able to get him to calm down, but not before he was in tears and was an emotional mess.  Somehow the rest of the evening was salvaged and things returned to normal.  And I learned a big lesson.
I learned that if I buy another Sunday paper, I have to be as sly as Aaron.  Gary and I sometimes stop by the store and get another paper, but now we might leave it in the car until the coast inside the house is clear.  In other words, until we can furtively sneak the paper into the house without Aaron seeing it.   Or we’ll bring the newspaper in the house, but quickly hide it before Aaron sees what’s in the bag.  The other day, I had the extra paper in full view on the table when Aaron bounded down the stairs.  I quickly hid the paper on the chair, out of Aaron’s sight, again feeling like a reckless teenager hiding a secret stash of cigarettes or something from Mom and Dad.