Skip to content
The other night I went into Aaron’s room to tell him goodnight.  There he was, all propped up in bed with his special fuzzy black pillow behind his back and all his other items around him in the particular order that he likes.  I walked around his bed to get to the side on which he sat so that I could hug him……..and as always, he never looked up from his reading to acknowledge that I was there.  I hugged him anyway as he continued to read and I said, “Goodnight, Aaron.  I hope you sleep well.  Love you.”  To which he replied, “Hmmm – OK.”
And as so often happens, when I started to walk away he perked up and said, “Mom!”   Which means that I must stop and turn to face him while I wait for him to continue.  And wait.  And wait.  And finally he said, “Mom, I bit my lip while I was eating nuts.  See?  Is there a bite point?”   He poked his bottom lip out so that I could perhaps better see the bite point.  I leaned down and looked at his lip as he pulled it downward, hoping that surely I would see the bite point and have some empathy for his pain.  All I was seeing was the rather gross view of the inside of his lip, even as I wondered where he had stashed his peanuts.  Well, I did see a little something on his lip so I told him that yes, I think I saw the bite point……….and he was satisfied.
He immediately held out the book he was reading – his Handy Answer Science Book – and said, “Mom, look!  I’m reading about that scientist.  You know…..the one named Einstein.” 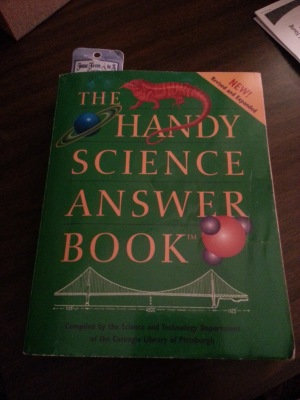 Yes, Aaron, Einstein was very smart.
Aaron responded, “But he had really funny hair.  Einstein looks like a girl!  He looks like a Grandma!” 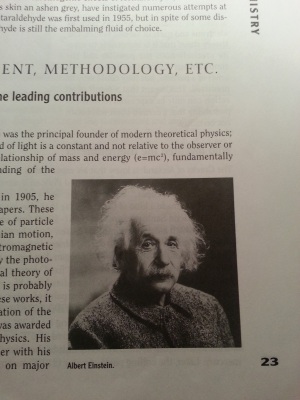 I apologize to you Grandmas out there.
I tried to explain a little about Einstein to Aaron, but he was totally immersed in the thoughts of Einstein’s wayward hair and how much he looked like a girl……..a Grandma girl, to be precise.
Aaron has a very inquisitive mind and we often tell him that he is very smart because of his curiosity………..like Einstein.  A few days after our Grandma Einstein conversation, I again told Aaron that he is very curious and smart……to which he replied, “Like when I know that if you drink lots of water, your pee is clear?”
Good grief.  He sometimes leaves me speechless.  He stood there, very proud of the fact that he knows this scientific information concerning the relationship between the volume of water one has drunk………..well, never mind.
Speaking of which, Aaron has always had a certain fear of toilets.  He is absolutely terrified of a toilet overflowing.  He is also scientific enough to know that when the water volume is very low, then the toilet is probably stopped up.  In addition, he is also scientific enough to know that this probability is directly related to the amount of toilet paper that he sometimes tries to get the toilet to accept without overflowing.  He has learned that toilets have limits.  Small amounts of water in said toilets usually mean that these toilets have reached their limits, and the next flush may be disastrous.  His worst fear is then realized.
In his bathroom, there is a fairly new toilet that has a low water volume.  Aaron does not trust this toilet……..at all.  The other night he said, “Mom, I used your and Dad’s bathroom.”  Now this is nothing new and I wondered why he felt the need to share that information.  I told him once again that he should use his bathroom…….his nice, new bathroom that is all his now.  I asked him, “Aaron, why don’t you like to use your toilet?”   And he matter of factly answered, “Because the water is quite low, actually.”
I laughed.  He sounded so much like a professor…….an Einstein without the Grandma hair, reading his Handy Science Answer Book and sharing with his mother some of the things he has learned.  He is curious, and he is literal.  The other night it was,  “Mom, I was reading about the periodic table.  That’s a funny name for a table.”   I guess he thought of this fact because we were playing Skip-Bo at our kitchen table, which reminded him of that strange table he had read about………the periodic table.    I assured him that the periodic table was not a table at all, like our kitchen table, but was a chart.
“A chart?” he asked.   Yes, Aaron, a kind of chart…….you know, a chart…….on paper.   He thought for a few seconds and then said, “It’s not a normal kind of table.”
Ah, literal Aaron.  A table is a table is a table…………so a periodic table is some kind of strange table, not a normal table.  Forget the chart idea, silly mom!  So I didn’t press the issue or try to explain it further, as I have in the past.  Explaining the elements and their symbols to Aaron was a bit much that time, I remember.  It made me want to pull my hair, but then he’d say I was looking like Einstein.  I mean, I am a girl…………old enough to be a Grandma girl.
Let’s talk about toilets, Aaron.