Skip to content
Aaron sure was in a great mood this morning.  He’s excited about Thanksgiving, and has been in his usual countdown mode, reminding us about how many days it is until the big turkey day!  He’s excited about having Andrea and Andrew home for a visit, and about getting to meet Andrea’s new dog, Darcy.
I heard Aaron in the shower while I was still getting ready, and without having to be told.  That’s unusual!  I wondered if the mirror in his bathroom would be steamed over, knowing that it probably would be.  He refuses to turn the exhaust fan on because he’s always had a fear of those fans from the time that he was a young child.  Plus he loves to sometimes write in the steam that’s on the mirror, and then to see those words reappear every time the mirror steams over…….which is every time that Aaron takes a shower!  He usually writes something like “Aaron is cool.”   He thinks that this is funny and doesn’t mind at all that I fuss at him about writing on the mirror.
The other day he said, “Mom, the bathroom window gets fuzzy when I shower.  I wrote ‘battleship’ on it!”  So sure enough, the next time I was able to go in the bathroom right after he showered to see the still-fuzzy mirror, there was the word ‘battleship’ written on the fuzzy mirror.  Why battleship?  I have no idea.  Sometime I may ask, but that morning I didn’t have time for what I knew would be a lengthy answer and then a run-down of that movie………..the one that I still haven’t quite recovered from. 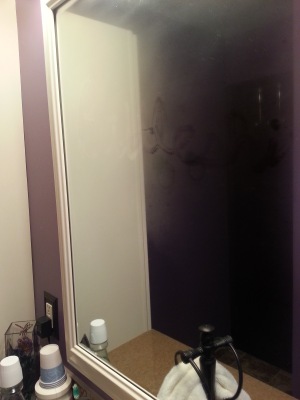 As I met Aaron in the hall after his shower this morning, he said, “Mom, it’s only two more days until Thanksgiving!  Today is the 20th and Thanksgiving is the  22nd!”  I don’t really need calendars as long as I have Aaron around!
Aaron wondered if we could leave early and stop by Dillons for some peanuts, so I hurried and got ready.  Soon we headed down to Dillons on our way to meet his group, where he bought a flavored water and a jar of peanuts……….after trying to pick up the largest container of peanuts that he could find and having that choice vetoed by mom.
There is no hurrying with Aaron, and I was trying hard not to be late to meet his Paradigm group.  Aaron plunders along very slowly, and before I knew it he was way behind me…………cradling his drink and his peanuts in his arms, and saying hello to nearly everyone who came his way.  This is a new behavior of his, this greeting he gives to people that he passes.  Or sometimes if he thinks he’s in the way, he’ll say “I’m sorry” over and over again to various people in the aisles.   I smile even as I tell him to hurry or tell him that he doesn’t have to apologize for merely passing people in the aisles.
Finally we were in the car, heading to his group meeting place, with Aaron continuing to talk.   “Mom, is that legend of the weeping willow tree true?  You know, the legend that says the tree looks like it’s crying because it’s all bent over.”  We talked about the weeping willow tree legend while we listened to a song……..a song which suddenly captured Aaron’s attention.
“Mom, is that Alabama?”
I told him that it is not the group Alabama.  “Oh, I wondered because I didn’t think they had a girl in their group.”
So I told him that this was a group that had two girls.   For some reason, he could not figure this fact out.
“I didn’t know that girls sang in these songs.  I thought they only sang about love.”
I was trying to figure this out and to explain that girls sing lots of different songs, when we pulled up to the car that was driven by Cody.  Aaron always opens his window when we drive up, and Cody opens his window………..and they have a little conversation before Aaron leaves our van and joins the group.
This morning Aaron said, “Cody!  Mom was listening to a song that had girls singing in it.  I thought they only sang in love group songs!”  Cody laughed as Aaron continued to talk about what songs girls sing.  Aaron never asks Cody how he is doing but instead launches right in to whatever is on his mind, or whatever he and I have been discussing.  I wonder if he continued to talk about girl songs as he and Cody drove away?
I think I’ll go clean the bathroom mirror now………or maybe I’ll leave it so that when Andrea and Andrew see the fuzzy mirror after their showers, they’ll smile at the sight of Aaron’s writing on the mirror.  Some things never change, especially with Aaron.
I guess that’s why he was surprised that girls would sing something other than love group songs.  Girls are so confusing!