This past weekend found us moving Andrea out of her apartment an hour from here as we prepared to take her down to Texas to begin her new life as a graduate student.  Andrew got home late Friday night and on Saturday, with the help of wonderful friends, we got the U-Haul loaded and ready for the trip to Texas on Sunday.  I was dreading all the “lasts” that accompany a time like this and was trying hard not to dwell on them.  Saturday’s supper around our table was one of those “lasts” that I was going to be facing and I was praying that I would stay composed and not get emotional.  I should have known that having Aaron eat with us was the answer I needed.  Oh, he can raise our emotions for sure……………just not the kind that I was dreading.  Thankfully, on this “last supper for a long time” together, Aaron had us laughing.  He had no idea what a relief he brought to us that night!

As always, he talked and talked and talked some more to us, his captive audience.  He does know how to seize the moment when we are all together and then monopolize the conversation.  I don’t remember all that he talked about………….we never do………….and there are times that we try to forget what he said, trust me.  He was very excited about the fact that we were leaving because that meant that Krysten was coming to stay with him………….and that meant eating out and getting pizza and renting movies and having one-on-one time and attention that perfectly suits his “it’s all about me” mind set.  He was looking forward to a break from old Mom and Dad.  Little did he know how much we were looking forward to a break from old Aaron, too!  Ha!

As always, he talked about his latest movie that he’s watching and Handy Answer Religion Book that he’s reading.  He talked about the dog and the weather and what he’s done lately at his day group.  Talking about his day group, Paradigm, reminded him that Brandy, Paradigm’s owner, apparently had some of her family visit………..except that Aaron didn’t refer to these people as Brandy’s family.

“Hey!  Yesterday some of Brandy’s ancestors came to Paradigm.”

We knew right away what Aaron meant.  He continued, “I think they were 5.”

Hmmm……….pretty young ancestors she has.

So we discussed Brandy’s ancestors coming to Paradigm and how they are actually called relatives and why they might have been there……………and all the while, Aaron kept calling them ancestors.  And he always will.

I had fixed Lasagna for supper, so as Aaron talked we watched him meticulously separate the meat from the cheese.  This was quite a process as Aaron hunched over his plate and scraped and separated, never missing a chance to talk in the midst of this serious food re-arrangement.  Then suddenly he remembered it…………a billboard he had seen while driving with his group.

“Yeah, a billboard!  You know what it said?”

He paused for us to answer………..for us to tell him that we did not know what it said.  He loves this part.

“It said – cornstalk powder for butts!!”

Cornstalk powder for butts?  So now we were all cramming the lasagna in our mouths in an effort to keep from bursting out laughing, as I told Aaron that I bet this was actually cornSTARCH powder.

So we had a discussion at this our “last supper together for awhile” about cornstalk powder which is really cornSTARCH powder and why it’s good for baby’s butts.  This is a place I didn’t expect to be during this meal, but I have to say that it did keep my mind off the fact that Andrea was leaving.  And instead of holding back the tears, we were holding back the laughter.

Thank you, Aaron.  You do have a way of diverting us from the reality at hand.  Do you ever!  But finally the subject of Andrea’s soon departure did arise.  Aaron came to attention and we wondered what he was getting ready to say.

“Andrea!  Look what I bought the other day!”  He got up from the table, went into the kitchen, and came back carrying the three…………yes, THREE……….bags of Reese Cups that he had bought at Wal-Mart.

And he said, “Here.  You can have this to take to Texas.”  He handed her a bag of unopened Reese cups.  Normally she would not want them, but she saw his heart and his real message of love.  She accepted the Reese cups and thanked him warmly………….and he was very pleased. 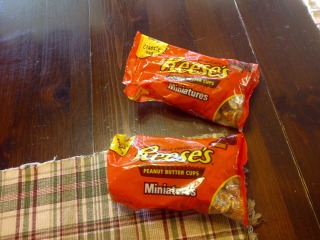 The next morning she went up to his room before we left.  He was sitting at his computer and she gave him a hug and said goodbye.  He just mumbled an unconcerned “OK” and “See you later” and kept playing his game.  She smiled when she came downstairs.  We know and understand Aaron so well.  Anything BUT the mumbled response would have been very surprising.

But there in her little apartment in Texas, as we helped her unpack on Monday, lay that bag of Reese cups.  There lay tangible proof of Aaron’s love, each piece tightly wrapped, waiting to be opened and enjoyed.  Just like our Aaron…………..opening himself in his Aaron way for us to see his heart.