I fixed spaghetti one night this week.  Aaron loves spaghetti, especially if I let him put the Parmesan cheese on top.  He takes the grated Parmesan container and shakes for all he’s worth.  Cheese ends up all around his plate, like snow or maybe a bad case of dandruff.  It really is a mess. No amount of reminders or warnings totally solves the problem.  Therefore, we try to avoid this mess by taking the cheese and shaking it on Aaron’s spaghetti ourselves.  He doesn’t appreciate our help at all.  He says, “I’m not a baby!  I can do it myself!”  Or, “I’ll be careful!  I won’t shake it hard!”

Yeah, right, Aaron. And even if he doesn’t shake it terribly hard, it’s still the amount of cheese that’s a problem.  He mounds it up like a sand pile on top of his spaghetti.  I sarcastically asked him once if he wanted some spaghetti with his cheese, but of course the sarcasm was lost on him.  Too bad.

The other night he ate his spaghetti after we did.  Gary and I had already left the table.  I guess Aaron went to town with the Parmesan.  I had no idea that he had used it ALL.  Every little grain.

Last night I searched the frig for the grated Parmesan for another recipe and I couldn’t find it anywhere.  Hmmmmm………..I wondered where it was and figured it got put up somewhere that I  couldn’t see.  I just used some shredded Parmesan that I had instead.

Tonight I fixed some soup that Aaron doesn’t like and later when he came down to check on supper, I asked him if he wanted some of the leftover spaghetti.  He immediately asked, “Is there Parmesan?”  As we talked I realized that Aaron had used it all the other night.  Well, Aaron, since you didn’t tell me that you had used it all then I didn’t know to buy more so………no Parmesan.

BUT……….I have some other Parmesan that you can use, Aaron. 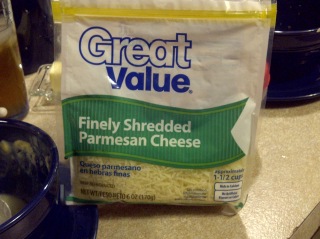 He was very suspicious of this unknown Parmesan.  I assured him it was the same thing as I reached in the frig to get the bag.  See, Aaron?  It’s Parmesan!

I showed him the bag as I laid it on the counter.  He looked at it as if I was handling a bag of poison that was about to erupt and contaminate us all.  He actually walked back a few steps as he looked at the impostor cheese.  I knew what was happening and that Aaron didn’t want anything to do with this strange cheese that claimed to be Parmesan.

I said, “Aaron, this is Parmesan cheese.  Here, try some.”  I put some in my hand and he backed up even further as he said, “I would not think I would like it.”

I know this.  I know this as surely as I know that Aaron will not blow his nose or change the order of the covers on his bed or eat defective Goldfish crackers.  He will not eat this strange looking Parmesan cheese that isn’t in the container that he’s used to and that says its shredded and not grated, for crying out loud!

Gary, Andrea, and I gave each other knowing glances and smiles behind Aaron’s back.  They know, too.  We know and we understand, even though we don’t really understand.  Knowing Aaron is like piecing together a multi-colored quilt in all sorts of shapes and sizes.  It comes together, but it sure takes time and patience.  The result is interesting and fascinating and sometimes frustrating.

And now I know that Aaron’s quilt will have grated Parmesan – NOT shredded.