Today was a full day with Aaron.  He had a dentist appointment and then an appointment with family practice at McConnell Air Base for his 2 year physical – part of his upcoming BASIS assessment this Friday.  Anyway, I threw in a few other stops along the way, too – so it really was a FULL day.  I thought you might want to get a little glimpse of my time with Aaron.

GREAT CLIPS
First, we stopped at Great Clips so he could get a much needed hair cut.  While waiting for a stylist to call Aaron, he had time to stare at the large pictures hung all around the waiting area – pictures of attractive people with attractive hair cuts that we would all like for Great Clips to give us!  But Aaron doesn’t notice their attractive hair cuts.  He (rather loudly) asked, “Mom, why do they always make their faces shiny in those pictures?”  He’s forever thinking that staged pics of models are interesting because their faces are shiny.  Hmmm………..they really are, you know.  Then he observed how the men getting their hair cut had the cape around them as well as the white strip around their necks, under the cape.  Again, rather loudly, he asked, “Mom, why is there a napkin around their neck?”  So in case they’re here for lunch they can just grab it and start eating, Aaron!

DENTIST
Aaron hasn’t been doing a good job of keeping his teeth clean.  This is always an issue with Aaron.  As we sat in the waiting room, he said, “Don’t you think going to the dentist is creepy?”  Well, I never would have used the word “creepy” to describe the dentist experience but I think it shows how Aaron feels about his visits there.  He came out rather agitated because he doesn’t like hearing the hygienist give me bad news, but today he got a good report for doing a better job of brushing.  Yay!  But as he said in his defense, “Everybody’s not perfect, right?!” 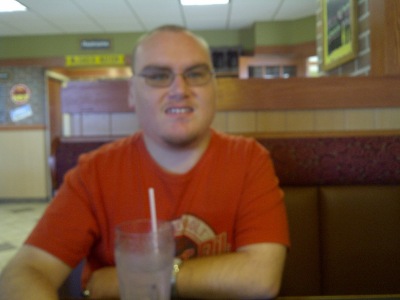 And here is the main reason that Aaron endured this day……………the unlimited pizza and salad buffet at Pizza Hut!!!  We were the first people there, before any pizza was even out on the buffet, so we started with salad.  With Aaron I feel like asking him if he wants a little lettuce with his dressing and cheese!! Good grief!  Of course, he enjoyed the pizza immensely.  He kept shaking Parmesan cheese on top, though, and getting it on the table.  This bothered him, so as we’d be talking and eating he kept wiping the crumbs off the table in big swoops.  To which I’d say, “Aaron, quit wiping the crumbs off the table.”  We talked about the dentist, about the weather, about what he wanted for his birthday…………….”Aaron, you don’t have to wipe the crumbs off the table.”   More talk about his doctor visit at McConnell, road work we might encounter on the way, will we go to Wal-Mart today……………..”Aaron, the waitress will wipe the crumbs off the table.”    Talked about running home to let Jackson out, what will we eat for supper, how to better brush his teeth…………………….”Aaron, DO NOT WIPE THE CRUMBS OFF THE TABLE!!!!!!!!!!!!!!!!!”
And finally…………..”Mom, can I have some of that black pudding before we leave?”  YUCK!!  So I got him some chocolate pudding………..he did not get to choose the amount for safety reasons.  I set the plate between us as he finished his pizza……………”QUIT WITH THE CRUMBS, AARON!!!!!!”    I sneaked my fork over and got a little sample of the black pudding – and he promptly moved the plate out of my reach.  Well!!!  At least the pudding didn’t leave crumbs on the table.

THE DOCTOR
His physical was very uninvolved and uneventful, thank the Lord!  The very young Air Force doctor was nice and pleasant.  I can always tell, though, that a new doctor is trying to figure Aaron out.  Good luck with that!  The funniest thing that happened all day, though, was when the doctor was going to check Aaron’s reflexes.  I guess he was trying to get Aaron to relax and not think about what he was doing.  Aaron’s tee shirt had writing on it, something about Thunderbird Motor Oil, etc. and so to get Aaron to not pay attention to what he was doing the doctor said, “Hey, Aaron, what does your shirt say?”

And Aaron looked down at his shirt and with a hint of disgust at this doctor’s ignorance, he replied, “Hmmph!  I can’t read it cause it’s upside down!!”  I’m sorry, but I just had to laugh – and thankfully the doctor did, too.

He can get the best of everybody!