I realize as I write these posts that there are many of you who really don’t know much, or anything, about Aaron’s history – his story.  I hope that I can briefly share a little of who Aaron is so that you will know him better.  I will begin by sharing that I remember so well laying in my bunk bed in my college dorm room and talking late into the night with my dear friend, Janet.  One topic that sometimes came up was how we would raise our children some day.  After all, at this point we were experts, you know!  I mean, we babysat and even aced our Child Development class!  Oh, little did we know.  But I do know that it never crossed my mind, crossed my lips, or even crossed my radar that I would one day be the mother of a child with special needs.  Permanent, life-long special needs.

Gary was getting ready to go to the field for several months just before Aaron turned 2 years old.  He and Aaron were in the den when I heard Gary calling me to come.  I thought something was wrong and hurried downstairs to find Aaron sitting on Gary’s lap and Gary holding a magazine.  Gary told me to look and he proceeded to point to random letters in the magazine article’s headline.  Aaron knew each letter and said it clearly!  We were astonished!  He wasn’t even two yet.  He loved Wheel of Fortune and loved his magnet letters on the frig but we had no idea that he really knew his letters.  That became our new fun game with Aaron. 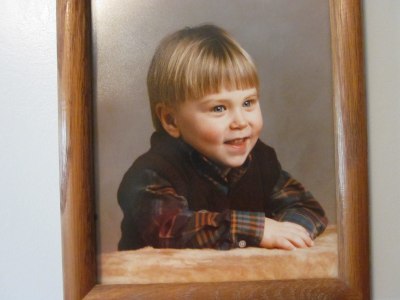 We moved to Hanau, Germany and were there for three years and then to Mannheim, Germany for another three – with a 6 month stateside stay in between for fixed wing school for Gary.  One Sunday in Mannheim, when Aaron was in the first grade, he came down with a virus.  That afternoon as I stood with him in our kitchen and he threw up in the wastecan, he fell back into my arms and started having a Grand Mal seizure.  It was a terrifying experience for us.  I had never seen a seizure and didn’t understand what was happening.  The ambulance came and off we went to the clinic, and then downtown to the German Kinderklinic, where he stayed for nearly a week.  He was diagnosed with Epilepsy there.  I remember coming home, finally, putting him into his own bed and then sitting at my desk crying out to God and crying my heart out for my Aaron.  It was the only time I allowed myself to have such a long crying spell.  I knew that it was time to move on and to trust Aaron into God’s hands.  My trust in the God I knew never wavered, not because of any great person that I am but because of the great God that I know. 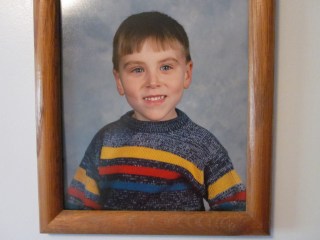 We moved to Leavenworth, Kansas, in 1993.  The next year Aaron was weaned off the seizure drugs because he had been seizure free for two years.  Soon after that, though, he had another Grand Mal seizure and also began having other kinds of seizures as well.  He was put back on the meds and has been on them ever since.  As Aaron grew we noticed more and more odd behaviors but attributed everything to the Epilepsy or to the anti-seizure drugs.   He had tactile issues and couldn’t stand things to be tight or scratchy against him.  He refused to wear jeans, for instance, and would tear tags out of his shirts if they rubbed against his neck.  He couldn’t tolerate certain noises or loud voices.  He would sit for hours outside, breaking little sticks or leaves and putting the pieces into a container.  He would clap, very loudly, or make odd noises with his mouth.  He had a very hard time making or maintaining friendships.  Yet he taught himself cursive and was very sharp with math skills.

Life was more and more frustrating for Aaron, and for us.  We thought that these behaviors would pass as he got more mature, but maturity never seemed to come and the behaviors only increased.  We then wondered if his seizures were the cause, or possibly all the anti-seizure drugs that he was taking.  No doctor ever mentioned any form of autism to us and that thought never entered our minds.  Then came a new duty assignment, a new home, a new life, and a new doctor.  And puberty!  I’ll continue that part of Aaron’s story later.