Skip to content
In my front flower bed that runs along our sidewalk, I have two Purple Salvia plants that have grown there for several years.  Being perennials, they return every year to please us with their pretty purple flowers.  However, I have noticed for a couple years that they are quite different from one another in their size.  The one on the left of the bush that separates them is large and full.  The salvia on the right is much smaller.

This spring I watched them and saw that the same thing was happening.  In fact, I wasn’t sure for awhile that the salvia on the right was even going to make its appearance.  One day, though, I saw little green salvia shoots that were pushing through the soil and the faded mulch.  It seemed to take forever for any significant growth to emerge.  Yet there it came, slowly pushing upward from the soil.
I watched the process continue.  The poor little salvia was faithfully staying alive, but its sluggish growth could not be compared to the rapid, beautiful growth of its fellow salvia.  The small salvia was just no comparison to its large companion.  Seeing them nearly side by side, only separated by a small bush, only exaggerated their differences.  The one salvia was full and healthy, exhibiting such pretty blooms that attracted bees and our attention alike.  The other……….well, it was so puny and small that I stood one day staring down at it in pity………pondering whether I should just pull up the pathetic thing and plant a whole new salvia there.

But something stopped me from replacing the struggling little flower with a new one.  I saw that even though the growth was stunted, it was at least still growing.  This slight salvia was persistent, not surrendering……….so how could I give up and just yank it from the ground and replace it with one that I deemed more beautiful?  And as the days progressed, so did this meager salvia continue to grow.  Then one day I saw them……the petite beginnings of blooms!  Not only was my tiny salvia living, but now it showed the promise of flowering.  Sure enough, it did just that.  One morning I walked over to my little plant and found pretty purple blooms.  How exciting! 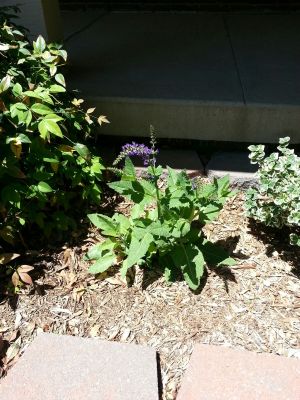 Oh, if I stepped back and compared the two plants to one another, the left salvia was still far more lovely……….all showy and bright.  It was indeed an eye-catcher, whereas the right salvia was puny and unimpressive.  Yet it was the lesser of the two plants that taught me the most.  I realize that the ups and downs of my life…..and probably yours as well……can often be compared to that small little salvia.
Sometimes we are that salvia on the left……….full of life and vitality in every area.  We are effective and bright, useful in the lives of many people as we see the evidence of our gifts being used. But then comes a time when we find our effectiveness seemingly dwindled down to a bare minimum.  For whatever the reason, we see ourselves and our service being replaced by others who shine brighter now.  We have become that salvia on the right……..smaller and struggling……yet not without hope, because there is still life!
So do you feel rather small today?  Do you feel stuck in the corner or put on the back burner, while nearby there are those who are full of usefulness and beauty?  It’s OK!  God loves small!  He brings us to these lesser times in our lives in order to teach us some very valuable lessons.
Moses went from the palace to the desert; Daniel went from royalty to the lion’s den; David went from the king’s side to hiding in a dark cave; Job went from wealth to a time of unimaginable loss; Paul went from prestige to prison.  And the most important example is Jesus Himself.  Jesus did not think that his position as the Son of God was something to be grasped, so He took upon Himself the form of a servant (Philippians 2:5-8).
Jesus……the Son of God…….royalty indeed……was born to a little virgin girl from the dismal town of Nazareth.  Jesus……born in a dirty cave with animals all around and a trough for a bed.  Jesus……..taken by Joseph and Mary to live in Egypt for several years of anonymity.  Jesus……then raised back in Nazareth, that town of no reputation.  Jesus…….a humble carpenter by trade.  He walked the dusty roads and ministered to the least of these, not garnering a huge and faithful following…….but faithfully following the call of His Father.  And He willingly suffered the most humiliating death of all……..the death that even Roman criminals were not made to endure………..the cross.  A death so awful that it was performed outside the city.  Jesus…….taking upon Himself our sin and being forsaken by God as he suffered our punishment.  And then He walked out of that tomb, alive and victorious! 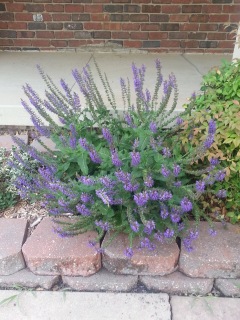 Jesus humbled Himself, and so He often asks us, in our walk with Him, to be humbled.  There are so many lessons to be learned during the time of smallness in our lives.  It is often a prolonged time as God speaks to us and teaches us the particular things that He has ordered just for us.  Yet what a time of growth it can be, if we don’t become impatient at the slowness of our progress.  Just wait, and one day you will see a bloom…….a flower……..the promise of usefulness still ahead.  Don’t compare yourself to the others who seem to be so much more beautiful and useful than you.  Thrive in the place where God has put you, and bloom in the way that He has allowed.
I’m so thankful that I didn’t pull up and toss away my scant and unimpressive salvia, for from that little meager plant I have once again learned a huge lesson!

One thought on “Lessons From the Little Salvia”