Skip to content
I love how God reaches out to me through His Word, and often through little known characters, in order to either challenge or bless me…….and sometimes to do both.  Once again I was reading in 2 Kings this morning, this time in chapter 5.  It’s another story that we are familiar with, but it’s the unfamiliar that spoke to me today.
We remember Naaman, the captain of the army of the king of Aram.  He was a great man and highly respected because God used him to give victory to Aram.  Naaman had easy access to the King of Aram, so he was right up there hob-nobbing with the great ones.  He was wealthy, too, with money and property and servants.
There was one problem, though.  Naaman was a valiant warrior, yes, but Naaman also was a leper.  Lepers outside of Israel were not always isolated, but the life sentence was the same.  There was no cure.  Disfigurement and eventual death awaited powerful Naaman just the way that it awaited everyone who had this awful disease.
In Naaman’s home there lived a little Israelite servant girl who had been taken captive by one of the many roving bands of Arameans.   Imagine what that little girl had endured.  Now she waited on Naaman’s wife, and one day this little unnamed girl said to her mistress, “I wish that my master were with the prophet who is in Samaria!  Then he would cure him of his leprosy.”

Obviously Naaman’s wife told her husband what this servant girl had said, because soon Naaman was telling the king about it.  The king of Aram wrote a letter to the king of Israel, and soon Naaman was on his way.  With him he took a huge wealth of silver and gold, along with ten changes of clothes.  He was ready to impress and he was willing to pay the price.
Eventually Naaman made it to the prophet Elisha.  There stood Naaman in Elisha’s doorway, along with all of his horses and chariots and wealth and changes of clothes…….and servants.  I’m sure that was quite a sight to see.  Not only a large caravan at the front door, but an enemy caravan to boot.
Now wouldn’t you think that Elisha would come out to greet Naaman?  It was pretty impressive to have this group show up at the front door.  But no……Elisha stayed inside and instead sent a messenger out to give Naaman a message.  The message was that Naaman should go wash in the Jordan seven times and then he would be healed.  That’s it.
Naaman obviously wasn’t used to being treated this way.  He was furious as he went away from Elisha’s house.  “I thought for sure that Elisha would come out and call on the name of the Lord his God and wave his hand over the place and cure the leper!” Naaman exclaimed.
“And furthermore, are not the rivers of Damascus better than all the waters of Israel?  Can I not wash in them and be clean?” he continued.   So Naaman stormed off in a rage and all seemed lost.
But once again, there were servants who came to the rescue.  Unknown servants……unknown to us.  “My father,” they said to Naaman, “had the prophet told you to do some great thing, would you not have done it?  How much more then when he said to you to wash, and be clean?”
Naaman listened to his servants.  He didn’t seem to hesitate but instead went down to the Jordan, dipped himself in the waters seven times, and then came out with the flesh of a little child…….pure and clean.
What I love about this story is the impact of the servants.  The little servant girl…….what’s her name?  Oh, we don’t know her name.  And those other servants?  Now who were they?  We don’t have a clue.  But look how they were used by God.  The little brave servant girl set things in motion for Naaman to be healed, and the possible terrified servants of Naaman encouraged their master to obey the prophet’s God and go dip in the Jordan.
What if the servants had been afraid to speak to their masters about what they should do?  What if they had felt unqualified to say anything?  What if they had decided that they really didn’t like their masters and so they would remain quiet?
What if that little country woman in the mountains of North Carolina had not spoken to that tall young man back in 1975?  That young man was Gary, my husband of nearly 35 years.  But back in 1975 he was a disillusioned young man who had been drafted during Vietnam, and had returned vowing that no one would ever tell him what to do again.  Gary lived in the beautiful Smokey mountains, working by day and reading philosophy books at night as he sought after truth.
One day he was in a grocery store when an unkempt mountain woman, her cheek full of snuff, looked at him and said, “Young man, you need the Lord!”  And Gary, with his long hair and his long beard and his head full of philosophy but not truth, was pierced to his heart by those simple words……words spoken by that unnamed woman.  He began reading his Bible and remembering the words of his godly grandmother, and one day he cried out to God……and was amazingly saved.
But it was the simple words of that simple woman, a woman he never had seen before and never saw afterwards, that caused Gary’s heart to be stirred and brought deep conviction to his spirit.   She wasn’t attractive or presentable, even, and certainly not educated or wealthy.  She probably had few if any accomplishments.  We don’t even know her name.
Yet she spoke to Gary, a word of exhortation and challenge, and God took that simple exchange and changed Gary’s life for eternity.  My life as well, and those of our children…..and who knows who else? 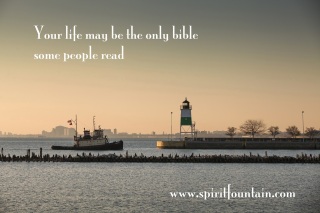 We may never know until eternity how one little word or phrase can change someone’s life.  We don’t have to be in the limelight, speaking or teaching before crowds of people, to be impacting other’s lives.  So often it’s the behind-the-scenes interactions that God will use the most.  A smile…..a hug……a card……a call……a prayer.    We just have no idea what God will use.
But I know who He can use.   God can use you and He can use me, in the very simple ways that are often the most profound.  We don’t need to have our names in lights, well known to all.
You know……what’s her name?
It’s all right.  God knows.