Let’s face it – life isn’t easy for any of us.  God has allowed Gary and I to be in a place we never even thought about as new parents to our beautiful baby Aaron over 32 years ago.  One summer I wrote some thoughts about persevering as we carry the burdens we face.  It involves an ant:

If you had driven by my house this morning you would have seen me standing in the front yard under our maple tree, watering hose in one hand and coffee in the other, with my hair blowing crazily in our Kansas wind. And to make me even more noticeable, I’m sure, was the fact that I was staring up into our maple tree for a long time. You see, God has often used my gardening as a time to teach me. Object lessons abound and this morning was no different. So I was observing God’s lesson for me this morning in the form of an itty bitty tiny black ant. An amazing itty bitty tiny black ant. 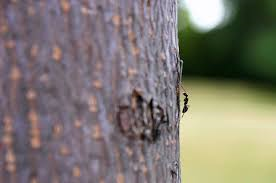 There he was, this little ant, carrying a white load that was bigger than he was. As he climbed up the tree, defying gravity with his load, he never wavered from the task at hand. Other ants were barreling down the tree, passing him as they went merrily on their way, seemingly oblivious to the load he carried. Several times he bumped into rough, curling bark that threatened to stop his progress. Then the wind blew and it buffeted him terribly. He would swerve and I wondered if he was going to fall down to the ground, but he never did. He pressed on and on until finally I could barely see him. I don’t know if he made it to his goal today or had to start over, but something tells me he accomplished what he set out to do. I know that God used that little oblivious ant to accomplish a work in my heart.

We all face those loads in life and I’m no different. I remember some of them in particular as milestones in my life. Usually the loads are painful, for that is when I learn the best. Aaron’s diagnosis of Epilepsy and then several years later of Autism were particularly hard loads to bear. Our frequent military moves were often painful as we once again said goodbye to family, friends, and ministry that we loved. Receiving the news of my dad’s two cancers, and then losing three of our parents in 14 months was at times too heavy to bear. Watching family that we love go through terrible trials takes a toll as well. That out-of-the-blue phone call that came several years ago that changed our lives and has impacted our children continues to be difficult.

I admit that lately I have become discouraged with it all. I have wanted to throw the load down and head merrily back down the tree to a life where things aren’t so burdensome. I’ve become tired of the impediments, the rough tree and curling bark. The winds of doubt and of feeling unused threaten to blow me off course. Worry, concerns, injustice – it all crowds in during the dark hours of the night when sleep won’t come. But today God spoke to me. Not with a mighty voice or an awesome miracle, but He allowed me to “consider the ant” and to be uplifted and blessed.

James said that we can know “that the testing of our faith produces endurance.” Endurance, which means abiding under difficulties. Not dropping the load and running back down the tree but living under the difficulties, pressing on toward the mark, and counting it joy. Thank you, God, for the strength that you promise; for the joy that you give under the loads of life; and for the little black ant that you sent my way today.

2 thoughts on “Lessons From the Little Black Ant”